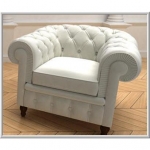 Show me directions to Cumfi Cushions

We re-upholster all types of chairs, sofas and seating units as well as working for restaurants, pubs. We can also take care of seating for boats and caravans.

The owner of the company is personable but the quality of re-upholstery is not so nice. I had an Ercol 2 seater and single seater re-upholstered by him. He took a &pound;10 deposit and we arranged a collection date. No issues there but when the items were returned I could see some things I wasn&rsquo;t impressed with. After mulling it over for a couple of days I called Mr Collins, he said he&rsquo;d come and have a look. After about 4 weeks he didn&rsquo;t so I called again, 2 weeks later I&rsquo;m still waiting. I don&rsquo;t expect to see him again. Do not believe the photographs in his website, the quality of the work is not that good. With my items the foam is not cut with accuracy so there are large gaps between the wooden frame and the cushioning. In places where the frame is meant to be hidden by cushioning, it&rsquo;s exposed. At the top of the backrest where it should be filled and rounded, it&rsquo;s partly flat. The same with the arm rests where missing foam makes the stitching look terrible. I&rsquo;m quite disappointed

Leave your review of Cumfi Cushions